The following architectural styles- form the Georgian to Colonial Revival- inspired the creation or popular adaptation of many of the architectural details available to homeowners today:

Georgian style was marked by stout columns, bold cornices and aeches, and other classical feetures, such as doorways trimmed with pilasters and pediments or entsblatures.
Fireplaces were adorned with classical details as well.

Greek Revival walls were adorned with a large baseboard and cornice molding. Tall walls were trimmed with fairly plain reeded or fluted molding.

Victorian rooms were full of ornament, using darkstained woods like oak and mahogany. Ceilings were often bordered by a bold cornice.
Tripartite arrangements, in which a baseboard, chair rail, and picture rail created three distinct areas, were common.

The Craftman period preferred simplicity and harmony over excessive ornamentation. Craftsman interiors were open-plan yet extremely cozy, with rooms in main living areas being divided by beautiful wood columns. Wainscoting was often used.

Most mordern homes have ranch or clamshell molding, designed to have a plain, steamlined profile. if you don’t want to replace it with more architecturally ornate molding.
you can add visual interest to basic molding by contrasting its color from the walls. If you’ ve used a flat paint on the wall, use a high gloss on the molding to provide visual interest. Special paint treatments, like spinging or marbleizing, can also give clamshell character.

Components of Door and Window Surrounds 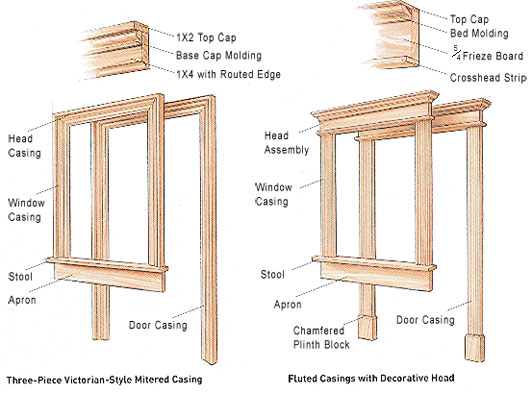 You might be concerned that extensive trimwork will make small rooms feel even smaller. In fact, the opposite occurs. Through a phenomenon called “geometric illusion,” trimwork often makes a romm appear lager and wider. Long horizontal lines, for example, can cause an observer to feel that a room is longer or wider than it really is. Likewise, long vertical lines can make a low ceiling appear higher than it actually is. 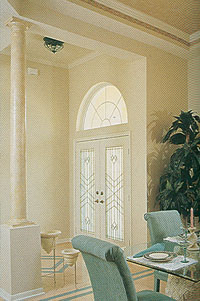